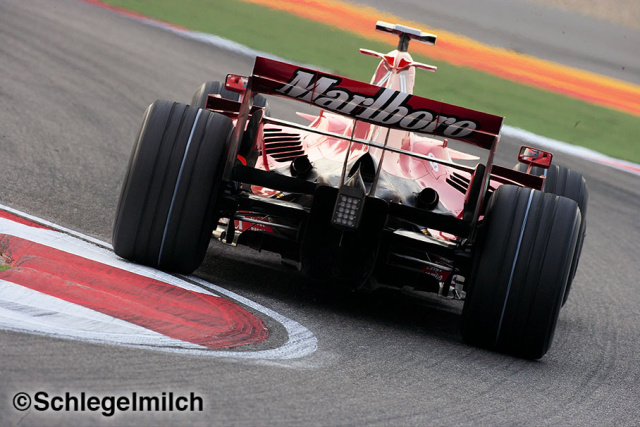 Schuey comented, “It’s a great thing getting back on the track with an F1 even if this was a car from 2007 from the F1 Clienti department with slicks usually used in GP2 and obviously there is no real point of reference.”

“Although those cars are not current or last year’s ones, I simply like to drive as much as possible, so this is a good option. The next weeks will be totally on preparation then.”

“After a couple of laps I was able to drive constant lap times and I’m happy with the performance.”

“Now we’ve got to see how my body and the muscles respond in the next days.”

The 2009 rules preventing in season testing mean that Michael would not able to test the current F60 Ferrari F1 car prior to Friday practice in Valencia. Ferrari submitted an application to the other teams and the FIA asking if they would allow Schuey an exemption to test the car for one day before this date, which was subsequently blocked.

In the meantime, an application was made by the German Motor Sport Federation (Deutscher Motor Sport Bund) for Schuey’s new FIA Superlicence. Schuey’s old licence expired at the end of 2006. This was expected to be granted as a formality, as he had competed in 15 grands prix within the past 3 years. A spokeswoman for the FIA confirmed, “Under normal circumstances Michael Schumacher should get a superlicense”.