Michael was forced to cancel his planned F1 racing return at Ferrari in 2009 due to neck injuries he sustained earlier in the year racing motorcycles.

A disappointed Eddie Jordan, who gave Michael his first F1 drive in a Jordan car, questioned why Michael ever risked such an injury saying, “What was he thinking with the bikes, he had rocks in his head.”

Interviewed by the BBC, Jordan questioned, “What he was doing on it, I don’t know – thats his business” and continued “his idea, in racing that motorcyle, was that he would be in a positon perhaps at 40 years of age to come back and race Superbikes. I mean what was he thinking of, is he out of his mind, this was just insanity…with the tyre contact on the road that they currently have in motorcycles, this was a step too far in my opinion.” 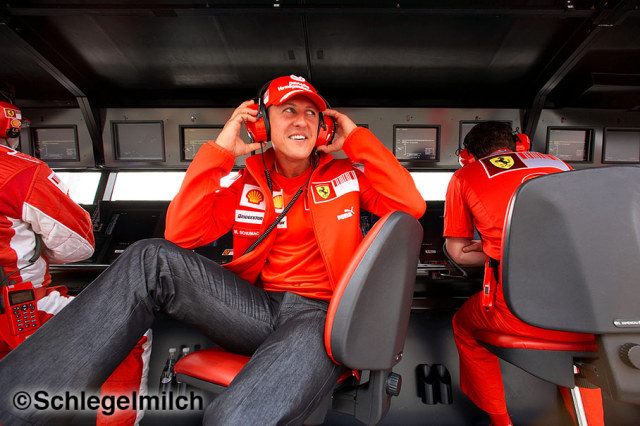 “Yesterday evening, I had to inform Ferrari President Luca di Montezemolo and Team Principal Stefano Domenicali that unfortunately I’m not able to step in for Felipe. I really tried everything to make that temporary comeback possible, however, much to my regret it didn’t work out. Unfortunately we did not manage to get a grip on the pain in the neck which occurred after the private F1-day in Mugello, even if medically or therapeutically we tried everything possible.

The consequences of the injuries caused by the bike-accident in February, fractures in the area of head and neck, unfortunately have turned out to be still too severe. That is why my neck cannot stand the extreme stresses caused by Formula 1 yet. This are the clear results of the examinations we did on the course of the past two weeks and the final examination yesterday afternoon. As there were no improvements after the day in Mugello, I decided at short notice on Sunday to do that thorough examination already yesterday.

I am disappointed to the core. I am awfully sorry for the guys of Ferrari and for all the fans which crossed fingers for me. I can only repeat that I tried everything that was within my power. All I can do now is to keep my fingers crossed for the whole team for the coming races.”