Michael Schumacher started out his racing career in the same way as all the great drivers, in karting.  At four years old his father built him a kart and soon after enrolled him in the local kart club Kerpen Horrom. Michael’s problem was that in Germany the regulations stated the minimum permissible age to obtain a kart license was 14. To get around this he obtained a Luxembourg license (obtainable from the age of 12). However in 1983 he obtained his German license and the year after he won the German Junior Kart Championship. From 1985 Schumacher drove for Eurokart dealer Adolf Neubert and once again took the title. 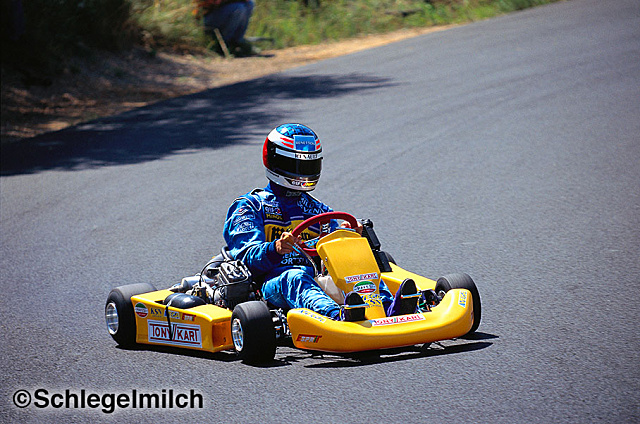 In 1989 Michael signed with Willi Weber, whose team WTS he would drive for during 1989 and 1990 in the Formula 3 Championship. Weber paid the costs for both seasons (approximately 1 million DM). In the 1989 season Karl Wendlinger was champion, with Michael finishing 3rd behind Heinz-Harald Frentzen.

During 1990 and 1991 Schumacher moved into sports car racing, instead of the more usual step up to Formula 3000. Many managers believed this would block his progression to Formula 1, but Weber believed that exposure to professional press conferences and dealing with the cars of 700bhp would be beneficial.

The Belgian Grand Prix of 1991 at Spa was Michael’s debut in the world’s top racing series.  His lucky break came as a result of Bertrand Gachot being imprisoned for spraying CS gas into a London taxi driver’s face. Qualifying 7th, he unfortunately retired on the first lap from this race with clutch failure of his Jordan-Ford. Although Eddie Jordan wished to sign Michael to the team, Schumacher was advised by Weber to act cautiously, as Jordan was to use factory Yamaha power the following year. They suspected this engine might prove to be second class and they were proved correct. 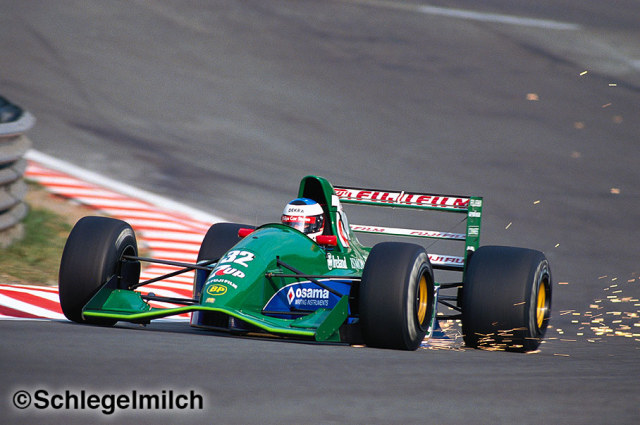 Michael driving a Jordan in his first Grand Prix, Belgium 1991

Subsequent to this Michael moved to the Benetton team, replacing Roberto Moreno. He competed in five more grand prix that season with Nelson Piquet as team mate. In 1992 Schumacher was partnered with Martin Brundle and his first victory was 1 year after his debut at Spa. During 1993 Ricardo Patrese partnered Michael, that being Patrese’s last year in F1. Michael’s second win came at the 1993 Portuguese GP. 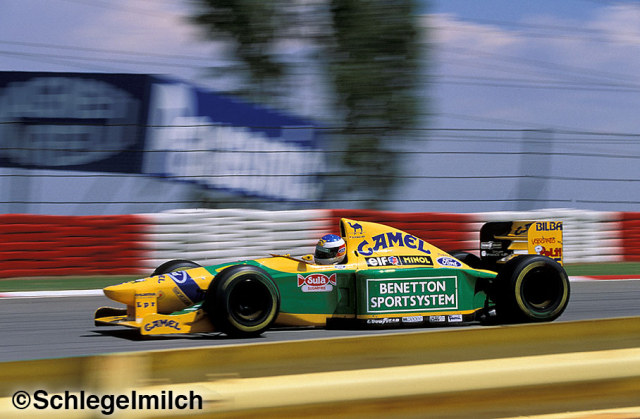 In the 1994 season with an under powered Ford Zetec V8 he took his first Driver’s Championship, after the death of Ayrton Senna at Imola. It came after a season of several run-ins with the FIA and he was disqualified from the British and Belgian Grands Prix. Michael was also put under a two race ban during the Italian and Portuguese GP that year. The race bans were a result of not adhering to a black flag (driver disqualified) at Silverstone that year. Instead of coming in, he continued on to win the race – the team had hoped that a later appeal would overturn the disqualification and hence keep the victory he obtained. The disqualification was a result of Michael overtaking Damon Hill on the parade lap, a seemingly psychological manoeuvre. In a controversial last round at the Australian GP Michael entered leading Damon Hill by one point. On the 36th lap Schumacher made an unbecoming mistake and banged the wall, damaging his rear suspension. He made it back on the track and as Damon Hill came to pass him on the next corner, Michael turned in on the Williams car. Hill’s front suspension was badly damaged and both cars were out of the race. Hence Michael gained the crown.
The 1995 season was just as successful. Schumacher now had Renault power, to match the Williams and he dominated the season. It was marred however by several collisions between himself and Hill. In a particularly stupid overtaking manoeuvre Hill took them both out of the British GP near the start of the race. Having taken 9 GP wins, Michael finished the season to take his second Championship.

The 1996 season saw Michael move to Ferrari with a reported salary of $30 million He stated the need for a new challenge as his reasoning, it being to return Ferrari to the pinnacle of motorsport. Eddie Irvine moved from Jordan to become his team mate in the same year. The Ferrari F310 car had poor handling and it was a testament to Michael’s ability that he managed to gain three wins. One of his wins, at the Spanish GP of that year was a wet race and is regarded as one of the best drives ever. His method of attaining time from the car resulted in somewhat flamboyant and uncharacteristic driving, with oversteering et al. With a lack of competitors Hill finally managed to take the world championship.

With Damon Hill being dumped from Williams in 1997, Michael’s main rival became former CART champion Jacques Villeneuve. The Ferrari was more reliable and a somewhat less than spectacular early season for Villeneuve allowed Michael to provide a challenge. He took 5 GP wins and at the last race of the season Michael was ahead in the championship by just one point. Mid way through leading the race in Jerez, Schumacher’s lap times began to drop off and concern was raised about the condition of his car. As Villeneuve came to pass on a corner, Michael turned in on him. His wheel banged the Canadian’s sidepod but the Williams seemed undamaged. Michael wound up in a gravel trap and was out of the race, with Villeneuve finishing third to take the title. In a decision by the FIA Schumacher was disqualified from the whole of the season as punishment for his manoeuvre in that race.

In 1998 the McLaren’s dominating the season convincingly and Michael was the only driver to come near them to provide a challenge. With the Ferrari improving significantly throughput the season and being particularly faster in the second half, Michael gained 6 wins and 5 other podiums. With the later outlawed mini sidepod wings the Ferrari’s took an historic 1-2 at the Italian GP at Imola that year.

Michael’s accident at the British GP in 1999 ended his chances of taking the title in that year. Prior to that it looked very probable that he would take it. Looking back on the season and the relative performances of McLaren and Ferrari it seems likely he would have done so. The fact that Irvine was so close to Hakkinen in the championship at the end, surely indicates that Schumacher would have had it wrapped up long before, had he been able to compete. However he returned to drive the second two races of the season and astounded the paddock with his speed, leaving the pack behind. Excuses from drivers such as Coulthard and Irvine included that he’d had a nice rest at home and they were tired out after a full season of races.
Michael regained the F1 Driver’s title in 2000 and then won it every year up to and including 2004. In 2005 and 2006 the streak ended with the Ferrari cars’ pace outdone by Renault, whose driver Fernando Alonso took the title in both years. Michael retired as a driver at the end fo the 2006 season, as the most successful F1 driver ever. He then took up a position as consultant to Ferrari. 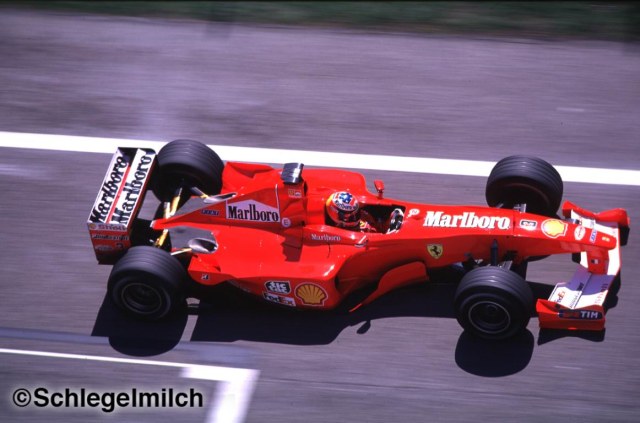 Michael in the car that he regained the championship with Ferrari, San Marino 2000

After Ferrari driver was injured, there was specualtion that Michael would return to F1 racing as a stand in for the 2009 season.  However, a neck injury from motorcycle racing prevented that.  Nevertheless, Michael did return to Formula 1 in the 2010 season on a three year contract with the Mercedes team.  He then raced for three seasons, including 2011 and 2012 before once again retiring.

Detailed race and season results can be found at www.f1db.de.