Ferrari needs no introduction, nor does the “Horse Rampant” insignia which their cars sport. The company that was started by Enzo Ferrari in 1948 and is now based at Maranello, Italy makes the most sought after cars on the planet.

The company’s road cars are all based on and backed by Formula 1 racing experience, making them unique. The racing team “Scuderia Ferrari” has the dedicated fan base in Italy named the Tifosi, who passionately support the team. The red colour associated with Ferrari cars is a throwback to the early parts of this century, it being assigned to Italian cars racing in Grand Prix by the International Automobile Federation.

In 1981, the Formula 1 racing team moved to a dedicated plant next to the Fiorano test track, previously being based at the Maranello factory. Some racing car components were however still manufactured at Maranello. A brand new headquarters for the Formula 1 team began construction outside the factory gates in 2013 and is now in operation.

The Chairman during Michael’s tenure at Ferrari was Italian Luca Di Montezemolo. Frenchman Jean Todt was Sporting Director of Ferrari, having originally joined the team in 1993. When Schumacher moved from Benetton to Ferrari in 1996, Englishman Technical Director Ross Brawn and South African Chief Designer Rory Byrne followed. Following Schumacher’s retirement at the end of 2006, Brawn took a sabbatical for the 2007 season and subsequently joined the Honda team. At the end of the 2007 season Todt moved to a senior executive role in Ferrari and Stefano Domenicali was promoted to head of the team. 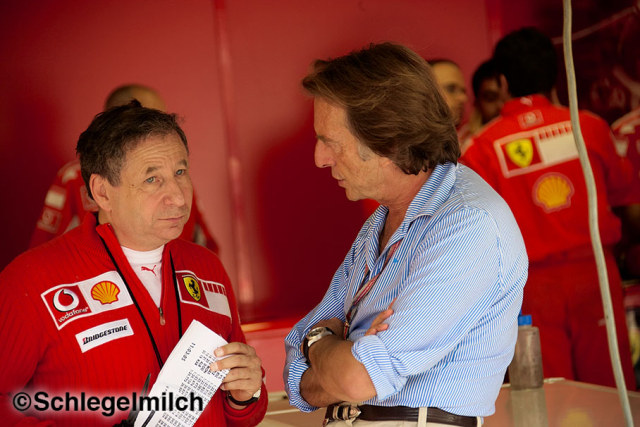 The driver line up for the team had from 1996-2000 been German Michael Schumacher and Irishman Eddie Irvine. Schumacher was the number 1 team driver and Irvine the number 2. This was contractually stipulated and Irvine had to defer to Schumacher in a race should the situation arise (which it did on several occasions). Although Irvine started out publicly stating his happiness for this situation and supporting it, during 1999 in particular he was outspoken against both it and at times Schumacher.

In 2000, Rubens Barrichello swapped from the Stewart team (which became Jaguar) with Irvine at Ferrari, to partner Michael. This was an inevitable move, not least because Irvine had, during Michael’s absence due to injury in 1999, made some disparaging remarks about him. Barrichello came to the team announcing that he was not a number two to Schuey, which many people found hard to believe. In confident style Michael stated that the driver who proved fastest would be team number one. Di Montezemolo clarified the situation by stating that the team had a number “1A” and a number “1B” driver.

For the 2006 season Felippo Massa joined as Michael’s new teammate, with Barrichello moving to the Honda team. 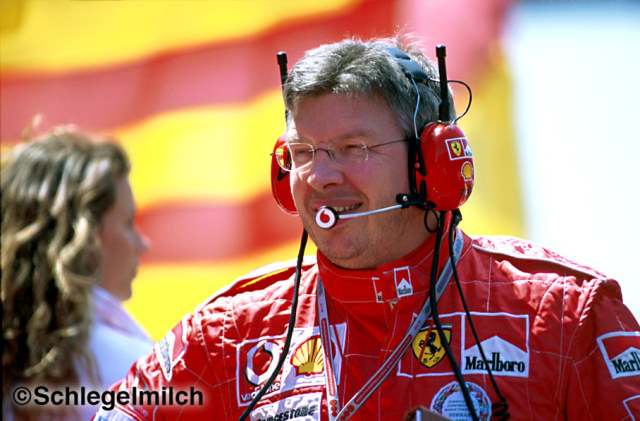 The 1999 car was the 45th racing car built by Ferrari to race in the championship. It was named the F399 by virtue of the fact it had a 3 litre displacement and that the year was 1999. For some years up until 1996 the team had been using a V12 engine, but regulation changes in 1996 restricted maximum engine displacement to 3000cc, down from 3500cc. The V10 layout was proven to be optimum for this size and all teams including Ferrari began using 10 cylinder engines. This continued until F1 rules mandated V8 engines from the 2006 season.

The F399 was an evolution of the previous year’s F300, sporting changes including a revised front wing and sidepods and an improved exhaust system.

It is important to note that even the paint thickness on a Formula 1 car is a consideration from a performance point of view. In a sport where weight saving is key, every factor comes into focus. For example, the Renault team have previously stated that they aim to ensure no more than 500g is added to the car during painting. Additionally any stripes or designs added to the car’s livery could lead to differences in paint thickness – which could affect the airflow over the car and increase drag. Paint depths on cars can be checked with an electronic paint thickness gauge.