After a superb victory in difficult dry and damp conditions at Suzuka, Michael clinched his third F1 Driver’s World Championship Title. This broke his dry spell since 1995, when he beat (the by 2000 retired!) Damon Hill, to take his second with Benetton. 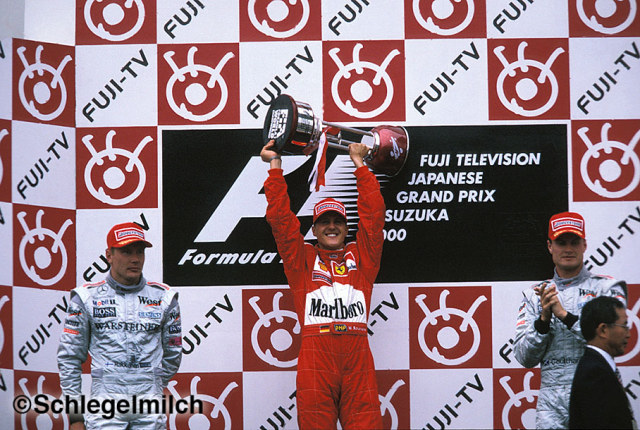 We had all been willing Schuey to win since 1996 to no avail and the man himself knows only to well: “When I arrived at Ferrari I did not think it would take me so long to win the championship,” he said, “but in life you can never plan anything to perfection. I want to thank all the 550 people who work for Ferrari. Without their help I would not have won the title.”

Reflecting back on the season Schuey remarked: “When before Monza I said that I had 90% of chances of winning the title I was branded a windbag. Without the problems we had in Monte Carlo and Magny-Cours, and without the accidents at Zeltweg (Austria) and Hockenheim I would have clinched the title long before Sunday. But the way we did it makes it even more extraordinary.” 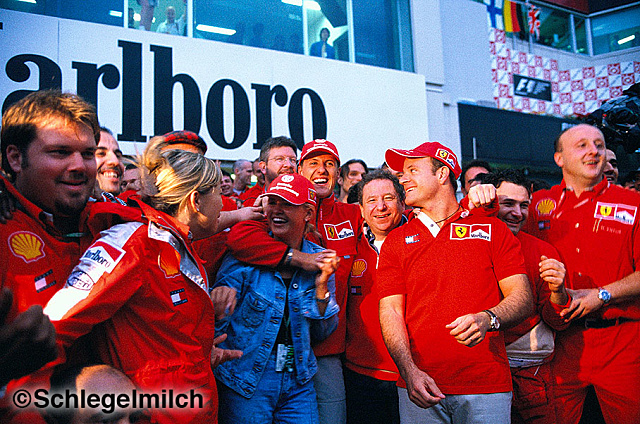 Schuey had tried to block Mika Hakkinen off the start line with his trademark “Schuey chop”, but to no avail as Hakkinen squeezed through from 2nd on the grid to lead. After the race Hakkinen explained he had no hard feelings about the swerve.

Hakkinen commented, “Michael did nothing to make me say that it was wrong”. “I accept what he did but I was not going to give up my position because I was going for it too. Michael saw me, knew he didn’t have a chance and let me get away. I am not complaining I don’t want to spoil Michael’s great day. Michael has done the best possible job for the year and we were not able to do it. I wish everything good for him. Let him enjoy the day. This is his year.”

Michael praised Finn Hakkinen saying, “He congratulated me. Mika is a great guy. The best driver I have ever beaten. He cannot be considered a loser. I hope we can battle it out for many years to come.” He also had more words on Mika for ITV sport: “Mika’s the best man I have fought against for championships, either winning or losing.” “I hope we have some more good years together. We have had some good races in the past, but I guess we have not had any harder races in our championship career than this last one.”

Jean Todt, Sporting Director at Ferrari also praised Hakkinen: “Today’s win came after an exciting fight with a worthy opponent,” he said. “Hakkinen is a great driver and a champion, both as a man and as a professional.” 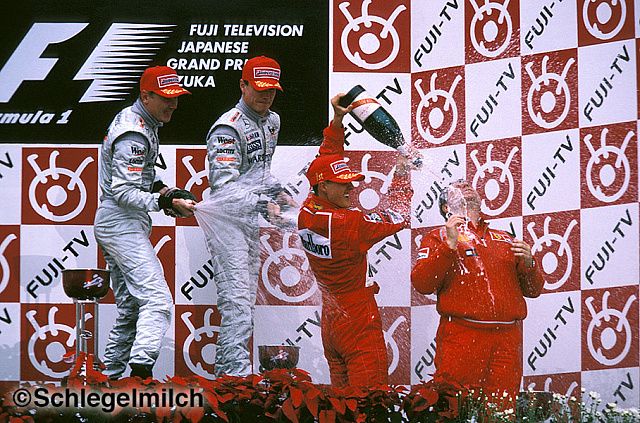 On a final closing note, it seems Michael is to be paid even more in the future! German publication Morgenpost of Hamburg, reported that Schuey’s third World Championship meant he could expect around DM30 million ($13.4 million) extra each year. Along with sponsorship and merchandising this was expected to lead to annual income of around DM145 Million in 2001.